Demo, soon to be a game I've been working on with smooth scrolling, simple mountain (landscape) generation with gradient fills, with parallel scrolling effect and moving space ship. The rocket will blast off and can be rotated left/right to speed up scrolling. Gravity and friction are used to ensure a realistic feel to the physics. The landscape scrolls through 360 degree's of pre-generated landscape; therefore the peaks of the hills will match the degree coordinates, as can be seen in the compass. The Sun and Earth rotate around the 360 degree's, according to their distance from Mars, with the Earth being closer. These objects inheret from a base Heading class, which is used to trigger the direction the player is viewing; all objects therefore inheret their placement in the world.

A thin blue line is shown at the centre of the screen for now for me to check sequences etc.

Left / Right to turn
Down to thrust

Please do look at the code and ask questions. I ask that you don't copy this as a whole, but do use it as a basis for your own game. I intend of adding several 'game' themes to this idea to show the realms of possibilities.. 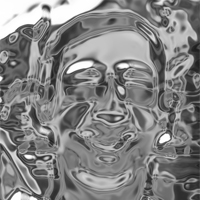 Please remember this is WIP; therefore I'm aware of plenty of bugs (i.e. when hitting ground etc, etc). I just wanted to update the scenario to show progress.
A new version of this scenario was uploaded on Tue Apr 03 19:02:52 UTC 2012 Thought I'd add an Earth; given I've decided this game will be on Mars. Do look at how easy parallex scrolling is to mimic.
A new version of this scenario was uploaded on Sat Apr 07 17:07:56 UTC 2012 Changed the landscape code to work correctly with a speed value; thus improving parallex scrolling whilst maintaining correct positioning with homebase. Homebase added. Earth/Sun speeded up to meet game expectations. I've now made scribbles on the game plan! Will start to implement them. This is going to be a resource collecting game. First step, get spaceman added with controls via mouse. 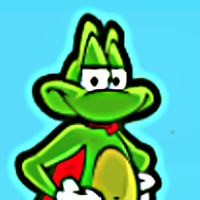 I think that this is a very cool concept to use in a sidescrolling game, It would be very cool to see if there were some enemies to fight as you flew