Left and Right arrow keys to turn, Up for thrust.
Space bar is your laser.
Z is your bomb and its reloading time is represented at the bottom center of the screen.
C is your sheild and is represented by the cyan rocketship in the bottom right of the screen.
My high score is 6292 (Level 12).
*Update*
*Added some more particle effects.
*After you die, you now can restart the game by pressing enter. (There is a small bug with this though. If you press any of the weapon buttons while you aren't in the world and then restart by pressing enter, your weapons fire. Also you keep the rate of fire that your laser had when you died.)
*Added improved sound effects for dying and laser firing.
*Added Power-Ups. They are availible every 3 levels. By picking them up, your laser's rate of fire will gradually increase, the bomb will have a bigger area of effect, and it will recharge quicker.

This scenario is a member of: Space

Nice!
A new version of this scenario was uploaded on Wed Nov 24 19:18:12 UTC 2010 Power-Ups every three levels, improved animations, and sound effects. 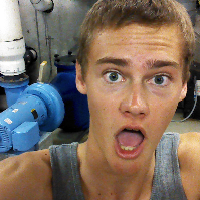 I tested this game a ton. I've played it over and over, trying to get things just right, and just once I got really lucky with 6292.

1848. It becomes critical to turn your shields on just before shooting the last rock, otherwise an asteroid can appear right on top of you as part of the next wave... maybe the new asteroids should all appear around the edges of the screen?

Dude, this is awesome. Anyway you can send me the source?

Dude, this is awesome. Anyway you can send me the source?