Essentially, one mundane day, on your way to your mundane job, somehow, your car exploded. As you fumbled around your now-flaming Toyota Corolla®’s multiple gadget holes for your mundane cellphone, you were transported through quantum time fluctuations generated by your exploding mundane car to what appears to be a gigantic tower! Not particularly worried, you slowly dial your mother to tell her that you'll be late for dinner. Unfortunately, before you could finish pressing so much as 1-2-3, you hear a groaning sound above you, which you discover to be a gigantic spiked disk of incredibly lethality. Even more unfortunately, you discover that the groaning noise was the result of faulty screws and supports allowing the gargantuan plate of doom to begin a slow descent towards the ground, and predictably, you as well. Sighing, you begin to jump down towards lower pieces of ground in this infinitely deep tower, avoiding other, smaller pieces of pointy spikes as you go.
This just isn't your day.

level 4 is the last level because it becomes really hard (not impossible) to survive (each level increases the movement speed of the platforms, spikes, and powerups

Yes, this program used Japanese characters (albeit with terrible grammar), as homage to Nintendo and Playstation

This scenario is a member of: ICS3U Cohen June 2013 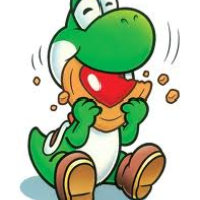 Not bad, not bad at all. one complaint though, could you add Arrow key control as well as WASD. I prefer arrows. Just me being picky though The DoctorProfessor is out!